This article was originally published in The Wire. The infographic is designed by Pooja Saxena and the content is provided by me.

Over the last month, a nine-judge constitutional bench of the Supreme Court has heard arguments on the existence of a fundamental right to privacy in India. Media coverage of judicial hearings in the apex court is often ripe with inaccuracies, thanks in no small measure to the court’s own restrictive policies, which, for instance, prevent video recordings. In this case, the arguments – which were heard over the course of three weeks – were widely reported in much greater detail and with fidelity, thanks largely to the live tweets by Gautam Bhatia and Prasanna S. (the entire collection of tweets is available here).

The availability of the entire set of written arguments made available by LiveLaw was another rich source for anyone following this matter in detail. The ruling by the bench will be of extreme importance not just for the immediate Aadhaar case, which has witnessed gross delays, but also numerous other matters in the future to do with state intrusions, decisional autonomy and informational privacy.

The questions before this bench are two fold – do the judgments in M.P. Sharma and Others vs Satish Chandra (decided by an eight-judge bench in 1954) and Kharak Singh vs State of UP and Others (decided by a six-judge bench in 1962) lead to the conclusion that there is no fundamental right to privacy, and whether the decisions in the later cases upholding a right to privacy were correct.

This infographic tries to unpack the hearings in the court into distinct issues, and the key arguments advanced by both the sides on them. The arguments from both sides on a particular question have been presented side by side for better appreciation, even though they were not argued together

Given the nature of the exercise, some of the arguments made in the infographic are bound to be a simplification of the actual issue. But it is hoped that this will provide a good overview of the issues argued. 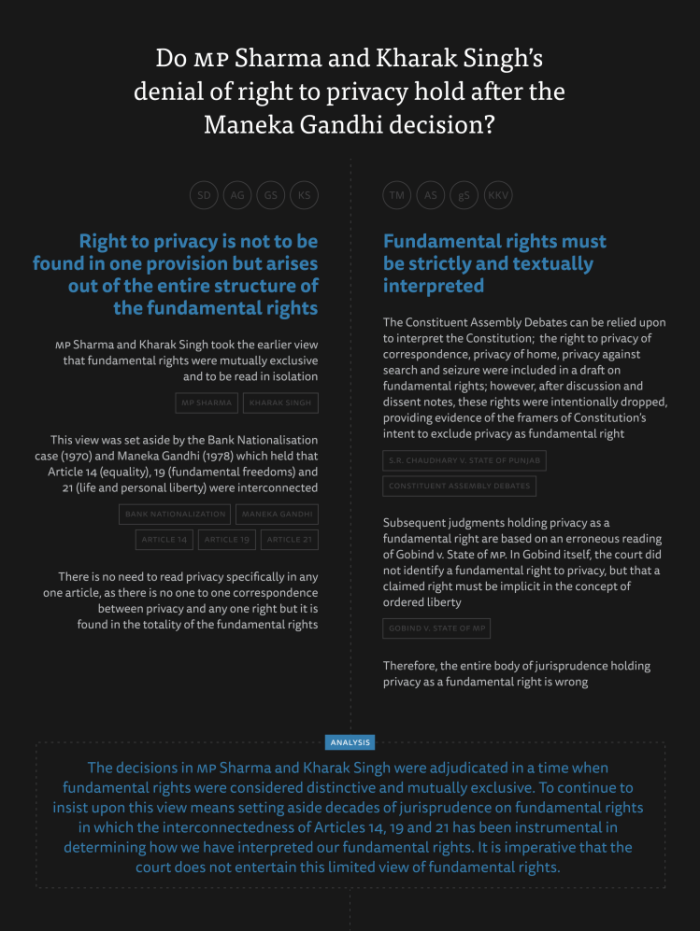